A little background to the three churches which are united as one congregation... 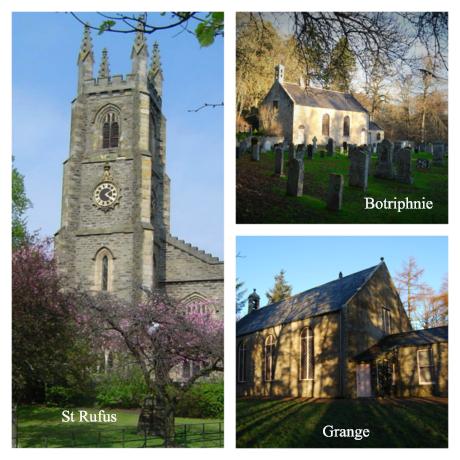 St Rufus  The former parish church was in the old churchyard at Auld Toun near the River Isla and dated back to mediaeval times. It was rebuilt in 1569 and then abandoned in 1819 when the new church was built to cater for the new town. The organ, originally built in 1892 by Ingram, extensively modified in 1926 and restored in 1986 by Nicholson of Malvern, has two manuals and pedals with twenty-two speaking stops.

Botriphnie  Located in Drummuir, five miles south west of Keith. St Fumac had a church dedicated to him in the late 12th Century followed by a new building in 1617, the south isle of which remains in the churchyard, a tablet on which records this as the burial place of the Stuart family. The present church dates from 1816-20. A lower session room and vestry were added in 1901. The organ is a Rodgers Essex 625 (electronic), which dates from around 1990 and has two manuals and pedals.

Grange  Three miles east of Keith, this parish church was built in 1795-6 with a two-storey porch, session house and vestry added in 1888-9. The organ behind the pulpit was built in 1905 and restored in 2007-8, and has one manual and pedals with six speaking stops.